Three men were standing in line to get into heaven one day. Apparently it had been a pretty busy day, though, so Peter had to tell the first one,

“Heaven’s getting pretty close to full today, and I’ve been asked to admit only people who have had particularly horrible deaths. So what’s your story?”

So the first man replies:

“Well, for a while I’ve suspected my wife has been cheating on me, so today I came home early to try to catch her red-handed. As I came into my 25th floor apartment, I could tell something was wrong, but all my searching around didn’t reveal where this other guy could have been hiding. Finally, I went out to the balcony, and sure enough, there was this man hanging off the railing, 25 floors above ground! By now I was really mad, so I started beating on him and kicking him, but wouldn’t you know it, he wouldn’t fall off. So finally I went back into my apartment and got a hammer and starting hammering on his fingers. Of course, he couldn’t stand that for long, so he let go and fell, but even after 25 stories, he fell into the bushes, stunned but okay. I couldn’t stand it anymore, so I ran into the kitchen, grabbed the fridge and threw it over the edge where it landed on him, killing him instantly. But all the stress and anger got to me, and I had a heart attack and died there on the balcony.”

“That sounds like a pretty bad day to me,” said Peter, and let the man in. 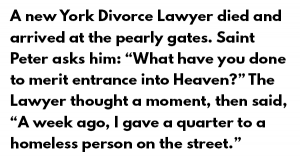 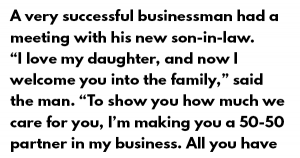