A couple were attending their first pre-natal class. So that the husband could get an idea of what it felt like to be pregnant, the instructor strapped a bag of sand to his stomach.

As he walked around with his new bulge, the husband said: “This doesn’t feel too bad.”

Then the instructor deliberately dropped a pen and said to the husband: “Now I want you to pick up that pen as if you were pregnant.”

“You want me to do it the way my wife would?” confirmed the husband.

“Exactly the same,” said the instructor.

The husband turned to his wife and said: “Honey, pick up that pen for me.” 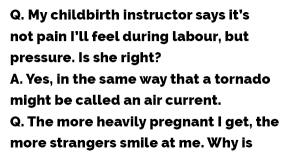 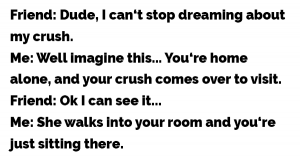