A guy walks into the doctor’s office and says, “Doc, I haven’t had a bowel movement in a week!” The doctor gives him a prescription for a mild laxative and tells him, “If it doesn’t work, let me know.”

A week later the guy is back: “Doc, still no movement!”

The doctor says, “Hmm, guess you need something stronger,” and prescribes a powerful laxative.

Still another week later the poor guy is back: “Doc, STILL nothing!”

The doctor, worried, says, “We’d better get some more information about you to try to figure out what’s going on. What do you do for a living?” 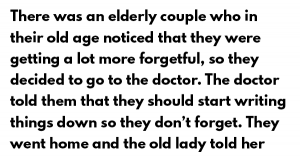