Two brothers enlisting in the Army were undergoing their physicals. During the inspection, the doctor was surprised to see that both of the men possessed extraordinarily long penises.

“How do you account for this?” he asked the brothers.

“I see,” said the doctor, writing in his file. “Your father’s the reason for your elongated penises?”

“Your mother?” said the doctor. “Don’t be so ridiculous! Women don’t have penises!”

“I know, sir,” replied the recruit, “but she only had one arm, and when it came to getting us out of the bathtub, she had to manage as best she could.” 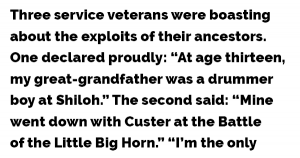