Three fathers we sitting in a bar bragging to each other about how successful each of their sons was. The first father declared, “my son is a successful doctor. In fact, he just bought his best friend a brand new car.”

“That’s all fine and good.” Said the second father. “But my son is a successful lawyer. He just bought his best friend a brand new yacht!”

“Ha!” Laughed the third father. “My son in an incredibly successful CEO of a large company. He just bought his friend his own private jet!”

Just then, a fourth father walked in and sat down with them.

“What does your son do?” asked the first father.

“My son is a gay stripper.” The fourth father replied.

The other fathers looked at each other. “You must be disappointed in how his life turned out then.”

“Nah.” said the fourth father. “In fact, he has three boyfriends and they all just bought him a car, a yacht, and a private jet.” 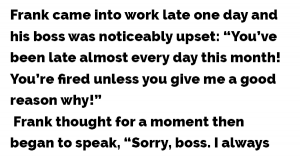 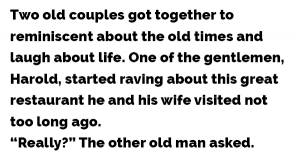