Sam and John were out cutting wood when John cut his arm off. Sam remained calm, wrapped the arm in a plastic bag, and took the arm and John to a surgeon. “You are in luck,” said the surgeon. “I am an expert in re-attaching limbs. Come back in four hours when I have completed the operation.”

So Sam returned in four hours and the surgeon said, “I did it faster than I expected. Jon is down at the pub.” Sam rushed down to the pub and was amazed to see John playing darts.

A few weeks later, Sam and John were cutting wood again when John accidentally cut off his leg. Sam put the leg in a plastic bag and took it and John back to the same surgeon. “Legs are harder,” said the surgeon, “but I’ll see what I can do – come back in six hours.”

Sam returned in six hours and the surgeon said, “I finished early – John’s playing football.” Sam went to the field and to his surprise found John kicking 50 meter torpedoes. 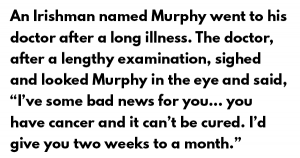 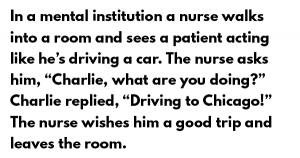