How many dogs does it take to change a light bulb?

Border Collie: Just one. Then I’ll replace any wiring that’s not up to code.

Dachshund: You know I can’t reach that stupid lamp!

Malamute: Let the Border Collie do it. You can feed me while he’s busy.

Jack Russell Terrier: I’ll just pop it in while I’m bouncing off the walls.

Greyhound: It isn’t moving. Who cares?

Cocker Spaniel: Why change it? I can still pee on the carpet in the dark.

Mastiff: Screw it yourself! I’m not afraid of the dark…

Doberman: While it’s out, I’ll just take a nap on the couch.

Boxer: Who needs light? I can still play with my squeaky toys in the dark.

Australian Shepherd: First, I’ll put all the light bulbs in a little circle…

Poodle: I’ll just blow in the Border Collie’s ear and he’ll do it. By the time he finishes rewiring the house, my nails will be dry.

Golden Retriever: The sun is shining, the day is young, we’ve got our whole lives ahead of us, and you’re inside worrying about a stupid burned-out bulb.

Upon arriving home in eager anticipation of a leisurely evening, the husband was met at the door by his sobbing wife. Tearfully she explained, “It’s the druggist – he insulted me terribly this morning on the phone.” Immediately the husband drove downtown to accost the druggist and demand an apology.

Before he could say more than a word or two, the druggist told him, “Now, just a minute – listen to my side of it. This morning the alarm failed to go off, so I was late getting up. I went without breakfast and hurried out to the car, but I’ll be damned if I didn’t lock the house with both house and car keys inside. I had to break a window to get my keys. Driving a little too fast, I got a speeding ticket. Then, about three blocks from the store I had a flat tire. When I finally got to the store there was a bunch of people waiting for me to open up.

I got the store opened and started waiting on these people, and all the time the darn phone was ringing its head off. Then I had to break a roll of nickels against the cash register drawer to make change, and they spilled all over the floor.

I got down on my hands and knees to pick up the nickels – the phone is still ringing – when I came up I cracked my head on the open cash drawer, which made me stagger back against a showcase with a bunch of perfume bottles on it, and half of them hit the floor and broke.

The phone is still ringing with no let up, and I finally got back to answer it. It was your wife – she wanted to know how to use a rectal thermometer.

In a huff, the woman slammed her fare into the fare box and took an aisle seat near the rear of the bus. The man seated next to her sensed that she was agitated and asked her what was wrong.

“The bus driver insulted me,” she fumed.

The man sympathized and said, “Why, he’s a public servant and shouldn’t say things to insult passengers.”

“You’re right,” she said. “I think I’ll go back up there and give him a piece of my mind.”

A blonde guy gets home early from work and hears strange noises coming from the bedroom. He rushes upstairs to find his wife naked on the bed, sweating and panting. “What’s up?” he says. “I’m having a heart attack,” cries the woman.

He rushes downstairs to grab the phone, but just as he’s dialing, his 4-year-old son comes up and says “Daddy! Daddy! Uncle Ted’s hiding in your closet and he’s got no clothes on!”

The guy slams the phone down and storms upstairs into the bedroom, past his screaming wife, and rips open the wardrobe door. Sure enough, there is his brother, totally naked, cowering on the closet floor.

“You rotten b.stard,” says the husband, “my wife’s having a heart attack, and you’re running around naked, scaring the kids!”

Fred is 32 years old and he is still single.

One day a friend asked, “Why aren’t you married? Can’t you find a woman who will be a good wife?”

Fred replied, “Actually, I’ve found many women that I have wanted to marry, but when I bring them home to meet my parents, my mother doesn’t like them.”

His friend thinks for a moment and says, “I’ve got the perfect solution, just find a girl who’s just like your mother.”

A few months later they meet again and his friend says, “Did you find the perfect girl? Did your mother like her?”

With a frown on his face, Fred answers, “Yes, I found the perfect girl. She was just like my mother. You were right, my mother liked her very much.”

The friend said, “Then what’s the problem?”

A man was walking along a California beach and stumbled upon an old lamp. He picked it up and rubbed it and out popped a genie. The genie said “OK. OK. You released me from the lamp, blah, blah, blah. This is the 4th time this month and I’m getting a little sick of these wishes so you can forget about three. You only get one wish!

The man sat and thought about it for a while and said, “I’ve always wanted to go to Hawaii, but I’m scared to fly and I get very seasick. Could you build me a bridge to Hawaii so I can drive over there to visit?”

The genie laughed and said, “That’s impossible! Think of the logistics of that! How would the supports ever reach the bottom of the Pacific? Think of how much concrete . . how much steel!! No, think of another wish!”

The man said OK and tried to think of a really good wish. Finally, he said, “I’ve been married and divorced four times. My wives always said that I don’t care and that I’m insensitive. So, I wish that I could understand women . . . know how they feel inside and what they’re thinking when they give me the silent treatment . . .know why they’re crying, know what they really want when they say, ‘nothing’ . . . know how to make them truly happy . . .”

The genie said, “You want that bridge with two lanes or four?”

“What have you done to merit entrance into Heaven?”

The Lawyer thought a moment, then said,

Saint Peter asked Gabriel to check this out in the record, and after a moment Gabriel affirmed that this was true. Saint Peter said,

“Well, that’s fine, but it’s not really quite enough to get you into Heaven.” The Lawyer said,

Gabriel gave the Lawyer a sidelong glance, then said to Saint Peter, 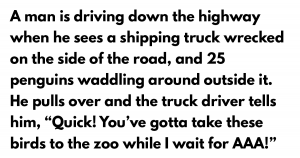 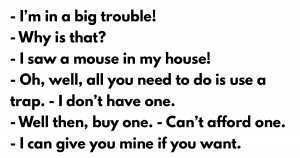