Once, there was a preacher who was an avid golfer. Every chance he could get, he would be on the golf course swinging away. It was an obsession. One Sunday was a picture-perfect day for golfing. The sun was out, no clouds were in the sky, and the temperature was just right.

The preacher was in a quandary as to what to do, and shortly, the urge to play golf overcame him. He called an assistant to tell him that he was sick and could not do church, packed the car up, and drove three hours to a golf course where no one would recognize him. Happily, he began to play the course.

An angel up above was watching the preacher and was quite perturbed. He went to God and said, “Look at the preacher. He should be punished for what he is doing.”

God nodded in agreement. The preacher teed up on the first hole. He swung at the ball, and it sailed effortlessly through the air and landed right in the cup 250 yards away. A picture-perfect hole-in-one. He was amazed and excited.

The angel was a little shocked. He turned to God and said, “I beg your pardon, but I thought you were going to punish him.”

God smiled. “Think about it-who can he tell?” 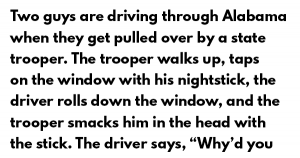 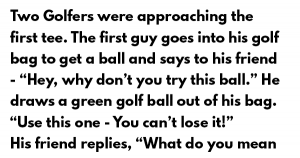