A pilot and co-pilot were descending for an emergency landing at an airport which they had never been to before. Suddenly the pilot looked out of the windshield and exclaimed: “Look how short the runway is! I’ve never seen one that short!”

At this, the co-pilot looked out and agreed: “Wow, you’re right! Are you sure we can make it?”

“Well, we better had,” said the pilot, “because we’re almost out of fuel.”

Trying not to betray his nerves, he went on the intercom and told the passengers to put their heads between their knees and prepare for an emergency landing. Then he set the flaps to full down and slowed the plane to a little over stall speed. 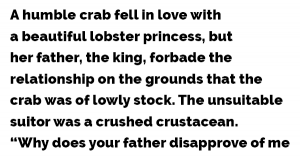